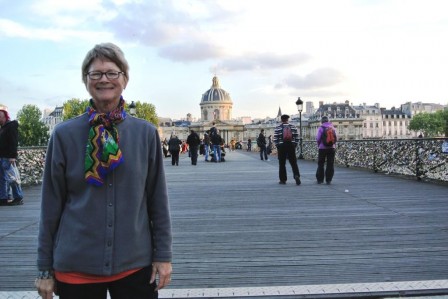 Nancy on the right bank of the Seine, with the Institut de France in the background.

Our apartment was located on Rue  Mazarine, in back of the Institut de France in the 6e arrondissement on the Left Bank. The Institut, though not open to the public, is un-missable from most any spot in Paris; just look for its large Baroque dome designed in the 17th c. by Louis le Vau.  Cardinal Mazarin, France’s most powerful political figure in the 17th c apart from Louis XIV, began a “college” here; he, and the college,  deserved a glorious building with a glorious dome. Today the Institut de France heads five government-backed literary, fine arts, and scientific “Academies,” and administers museums, chateaux, and over 1000 foundations. Its most well-known Academy is the “Academie Francaise,” the group of 40 (mostly) males who allow/prevent any change to the official vocabulary of the French language. “E-mail”, for example, was banned in favor of “courriel”, a contraction of “courrier electronique.” Guess how many French went along with that?

Our neighborhood was part of St. Germain des Pres, with its lively cafes, art galleries, booksellers, grocery stores, pastry and chocolate shops galore, and open air markets. The Institut provided a quiet street for our apartment’s location–sleep was possible in the St. Germain des Pres! 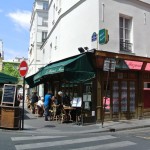 Cafe down the street from our apartment. 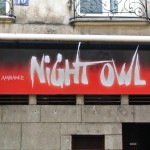 “Tourist” bar in our neighborhood 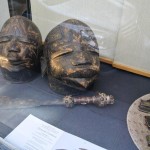 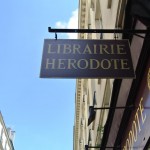 Bookseller of ancient books and manuscripts 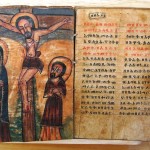 Manuscript for sale by Herodote Bookstore

At the end of our street was the sweet Square Gabriel Pierne with a statue of “Caroline” (whoever she was), and across from that a garden with a statue of Voltaire. Around another corner was the side entrance to the French Mint. Our street was very narrow. Very. Note the delivery truck wedged between a building and a car in the photo below. I saw the car later; it was a bit banged up. 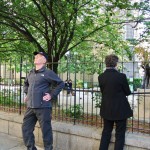 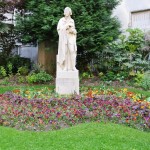 Voltaire, in garden near our apt. 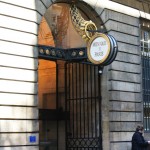 Side entrance to Paris Mint, close to our apartment. 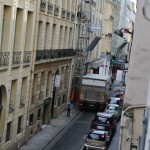 Oops! Truck wedged between car and scaffolding, on our apartment’s street

The Louvre was a mere 10 minutes walk across the pedestrian bridge the pont des Artes, and the Musee d’Orsay only  a 15 minute walk down the Seine. The Seine contains all manner of boats. In addition to the tourist bateux, near our apartment was the home dock for the Fire and Rescue boat, manned by the “Sapeurs- Pompiers of Paris” (BSPP); they are part of the French Army’s Engineering Division, which provides the fire service for Paris.  Several convenient  buses were routed along the narrow streets near us and two Metro stops were in walking distance. 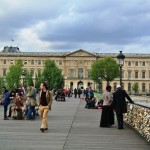 Pont des Artes pedestrian bridge with the Louvre in the background 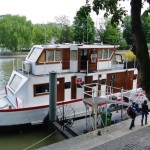 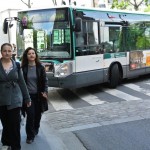 Bus barreling down narrow street of our neighborhood 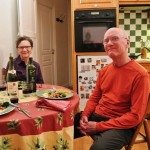 Ann and Michael at dinner in our apt.