No visit to Paris is complete without medieval churches and stained glass. Although Notre Dame is the most famous cathedral attraction, it was too dark and crowded for a long visit. Instead we went to St. Chapelle, luckily at a deserted moment. Later, to the Cluny Museum. 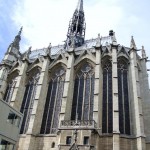 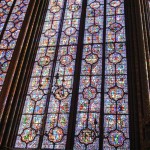 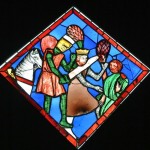 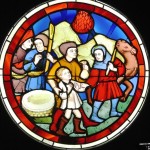 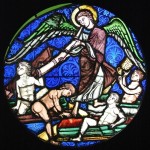 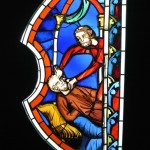 St. Chapelle: an outstanding example of French Gothic architecture, St. Chapelle was built by the 13th century Crusader King, Louis IX, often called “Saint Louis” for his dedication to Christianity and his conception of France (and Paris) as the premier Christian power of Europe.

At the age of 34, Louis personally raised and led the 7th Crusade, of mostly French nobles, to Eqypt. Despite his battlefield courage and saintly leadership of fractious nobles,the Crusade ended in disaster, with long-term financial and political consequences for most of the Christian players involved.  Louis’ wife, who went with him and gave birth to a son, saved the day more than once, while back in Paris his mother kept Louis’ political power and throne intact. The 7th Crusade’s disastrous ending haunted Louis, and 20 years later, he undertook another Crusade. This one did him in, and he died in Tunis at aged 56, along with the son born long before during Louis’ previous crusade.

Louis ruled for 44 years (surely a record in the Middle Ages). During his reign, the religious orders of the Franciscans and the Dominicans, trade, workers’ guilds, and the arts all flourished. All those  religious fervors, taxable activities, and technical skills enabled Louis to build St.Chapelle, located near Notre Dame on the Ile de la Cite.

The Cluny: Located in the 5th district, part of the Cluny is built on fragments of an ancient Roman bath, the Thermes. You can visit the Roman ruins, but even more interesting is the modern use of one of the vast Roman rooms: rows and rows of the sculpted heads of the Biblical Kings of Judah. The Heads were carved in stone in the 13th century for the Cathedral of Notre Dame. 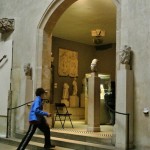 In the vast rooms of the Cluny 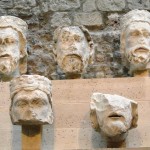 Heads of the Kings of Judah 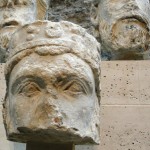 Detail of Head of King of Judah

The Heads, 28 in all, were trashed during the French Revolution in one of its anti-clerical frenzies, and thrown off their pedestals at Notre Dame (note the smashed faces and missing noses, as the statues toppled head first from their perches). The Heads were thought to have been completely destroyed. But in 1977, by serendipity, 21 of the heads were rediscovered buried underground.

The Heads of the Kings of Judah are part of the Cluny’s permanent collection. As part of its temporary exhibition program, the Cluny was displaying the very moving “Mourners of the Duke of Burgundy.” 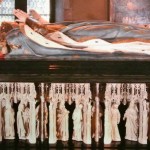 Illustration of casket of Duke John of Burgundy and wife, with mourners below 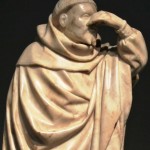 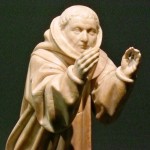 Mourner with Upraised Hands, for John of Burgundy

The Cluny has an English language audio tour, somewhat puzzling in its arrangement of topics, and an excellent bookstore and gift shop. It’s in the 5th district, close to Blvd St. Germain, between Blvd St. Michel and Rue St. Jacques. In other words on the critical path to our favorite macaron and chocolate shop, Weiss. Onward!